The woods were still, silent, serene, and sensitive to my existence. As I slithered through the tracks of the young man, dry dead leaves tickled the sensitive scales of my stomach. I propelled myself with my arms and rested upon a large stone that provided a perfect one-way vantage point. That young man would never spot me there, even if it took him hours even if he scoured every inch of the woods, even if he was aware of my sun-dried scales, even if it were just he and I alone.

I blended with the nature around me. Willed myself to merge with it, to feel the molten core of the earth as I wound through fallen branches and rotted leaves, and slipped through rocks with no concern for my girth. And the heat from that core awakened the rage in my own belly. A patient rage it was, but a rage nonetheless, and no mortal soul had yet managed to eschew their fates which I’d devised. The tally marks were kept, marked upon a stone in my lair.

My children would reach with claws while they wept, and scratch into the walls how many mortals deserved not to be spared. It had become an even tally (an uneven, unfair tally to the human, of course, but I was not about to afford him any advantages, nor lend him my remorse. Not when the survival of my species was no longer encased in a dream) until a mere two days before I arrived for the young man. We would square that tally today, it would seem.

The water of the bubbling brook tripped and traversed rock over stone, the beams of sunlight shone through the green leaves of the trees which rustled as the wind shuffled them from their biological place upon the bark.

I had journeyed long and far to find the young man. As I ground my belly against the bright red sand, I saw peripherally the mastery and evil of his hand. There he sat before me, his sinister actions on full display. His smooth brow indented in stern concentration, the very brow that would fold in its youth, given in to consternation, from which I would derive the most pleasant sensation.

Stillwater, Oklahoma. Water snakes were prevalent there. Oh, but they did no harm, and meant no ills to those worthless aberrational apes! But the apes cared not for such universal truths, for they only inflicted pain, fed upon the aroma of murder. The sun shone upon that boy, with chest bare beneath his overalls, which he had rolled up far above his primitive knees. The cloth legs dampened still, because the town name was a misnomer and the snakes swam beneath its surface. The splish-splash of their waves caused the water to rise and fall as though it were the breath of earth.

I sat and I spied as the young man sliced and sliced at my child with a dulled and rusted knife. The primate’s feet planted in the orange-brown mud with my child’s pieces on the green-green moss that my blackened, pained and angered eyes had given an existential rise. I softened the deathbed as the boy gripped the hilt and spilled more red-red blood from the belly of my beastly offspring, and I rose the soft-soft moss to cradle his lifeless, severed head and the white of his spine drenched in death, wiggled still, gripped in the knuckles of the young man.

He held his prize high, and it was then that I discovered the other boys who clapped and laughed, their incisors gleaming in the sunlit patch of land before the brook. My child’s teeth had never reached their flesh, had never tasted what lay beneath their veins, but they looked on as my baby was flayed and displayed as sick-sad trophy. A trophy given without fight, without a drip of humanity. I knew then that they should all suffer the horror of entropy. 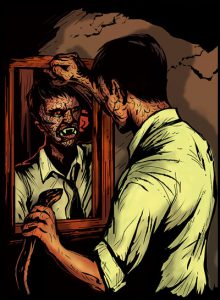 His body would writhe with the very death he bestowed upon the water snake. I’d make sure his Neanderthal form would survive just above the threshold of death until he, too felt the pain of dismemberment. And those friends would remember the red-red of his blood, the white-white of his spine, and the empty glare of his vegetated eyes.

I slipped away to gather my children, who waited for me beyond the brook, looking on from the other side, their thirst for revenge aching to be sated, and the ache of their brother’s loss temporarily alleviated. As I summoned them, hundreds of hissing, sneaky, slinky, children, bellies slimed by the algae of the river- swam with purpose through the water, the family whole but for the brother sundered.

As my children swam to the waters’ edge and surfaced to slink-slink upon the land, the boy, horrified eyes wide, dropped the knife. And his startled fans scattered, their feet trampling the blood-mud which spattered the hand of the boy, as that mean-mean glint faded from the whites of his eyes. When those eyes scanned the orange-red sand, my children came, their bellies damp, their minds stronger than that of man. The body of the boy was frozen as the wind wound through the woods- a breeze that tickled the leaves which now trickled droplets of rain upon his head. I split the brown-brown bark of the trees, and encouraged the sound of my children who in unison hissed as I summoned blood to seep in place of sap; as I summoned the very nature there to weep.

The boy gasped as my offspring began by winding up his rolled-up pants, and that gasp transformed into screams while the lean-lean bodies burrowed beneath his flesh. Risen skin bubbled with the cylindrical shapes of hundreds of snake-snakes that slithered and sank into his very veins and crawled through his mutilated form. Boy’s mind remained alive, but body could not withstand to survive. The dead-dead open flesh spewed blood and pus from incisor bites, blood and pus upon which my children gleefully fed.

Then came the process of stripping the skin. In the distance a few of the boys who viewed the original sin made it mere feet after their legs sprang up and as they ran, my children wrapped themselves about ankles and wrists and bound them, also, upon that red-red sand. Jaws approached from the sides, clenched and then opened the lids of their eyes, forcing the boys to cease retreat and watch what befalls those who kill but rarely die.

The boy’s own eyes exploded and gushed, his sockets awash in yellow pus mixed with bone, while one of my children, alone, squirmed in and out of those meatless holes. The shape of his mouth opened in a silent horror as the green-green scales slithered through and muted his cries. The scream-scream from his red-red lips was that of one who’d lost his soul. But not yet were we ready to finish the lesson he’d begun- what occurs to those who care not for the life they stole. Once the body fell, my babies crept and crawled, swarmed the mossy spot of the young man’s hell, providing for him a snake-snake shroud. And once they fled, my heart was warmed, my soul was proud.

Children wriggled in and out of his veins, and tore the skin from his spine, which now lay next to the severed head of the brother flayed. The smallest babies squirmed and twisted until from his flesh his fingernails lifted, and blood spurted forth from where they played.

The other boys screamed and squirmed and begged to be freed, but we were not fools enough to let that be. My children wrapped themselves around the sun-reddened necks of the youths, and hiss-hissed that if they stayed, they would be awarded their lives, though not the sort of lives lived by the sane.

The bite-bite of my children’s teeth is strong in poison and rich in deed. They clenched, sunk, bit, tore, slit, and the sting-sting of the poison worked its way throughout the onlookers, whose bodies folded until they sat, their brains intact, but forms frozen. Preservatives were then drained from the poison glands of my children’s fangs, injected into those who stayed to enjoy the site of the slayed. The murderer forever displayed- the plain-plain spine, the eviscerated frame. The vertebrae had so been arranged that the curvature was reptilian, much like ours, much the same, and the head of the young man was forever battered- no more eyes to shine in the light, so mean. Though what remained were the red-red lips, rounded forever in a soundless scream.

We fled across the clear-clear water, and we implored the snakes who lived there before to return with us to our ancient cave. Where the tally would be altered, evened, revealed, and for no human would they ever feel as though they were subservient.

The other side of the water.  The moist-moist grass upon the ground tickled our bellies, and from the city, the church bells sounded. It’s noon in town, and the mean-mean apes were stuck in hell.

I looked back upon the water where no ripples rang, where no waves lapped at the shore. The snakes were gone from its depths, and the water there was still once more.

Cthulhu: The Horror in Dunwich coming soon to Kickstarter